Portugal has had in the last weeks a big increase in the total number of deaths. As can be seen in the graph below (original here - in Portuguese), the last weeks have seen several hundreds of excess deaths in Portugal: 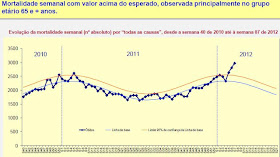 The graph shows the inconvenient truth that more deaths occur with the cold. Nothing really new, given the fact that this is observed in many countries around the world. And while people will continue dying, it really shows that the Global Cooling would have more impact than Global Warming. And that is especially true in Portugal, given the claim that 2011 was the 6th warmest year in 80 years, but no excess deaths occurred in the Summer out of the 95% confidence range.

These deaths have been attributed to two factors: the extreme cold that has been occurring in Portugal (and also Europe) and to the very high costs of energy in Portugal. Regarding this last factor, it is one of the main reasons why the Portuguese Economy has sank in the last years. In the last months, electricity costs have soared even more, with a VAT tax increase from 6% to 23% (now one of the biggest in Europe). An additional rise of 4% occurred at the beginning of this year. Even before this, official European statistics already ranked Portuguese electricity taxes the third highest in Europe (after Denmark and Germany), but some quick calculations reveal that almost certainly Portugal will have the highest cost of electricity in Europe, in 2012, considering the mean household income.

Despite all this, the Government is holding back cuts to the very generous feed-in tariffs given to wind and solar producers in Portugal! The only thing they have done is indefinitely suspending issuing licenses for new renewable energy projects, in the beginning of this year. Obviously, the producers are afraid that something more will be done. In the meantime, people associated with the alternative energy producers have come forward stating that the rises should be even bigger! Might be an incentive for people dying faster? Interestingly, it was not the Media that started talking about this, but the Health Minister, a clear symptom how inconvenient these deaths are for the Portuguese Media, mostly aligned with the Green movement.

Update: The number of deaths rose again last week, for the fourth consecutive week, to 3080, from 3030 the week before, as shown in the graph (data here - in Portuguese).
EcoTretas à(s) 18:05
Partilhar
‹
›
Página inicial
Ver a versão da Web